Several Linux distribution already work on RISC-V now. Next Debian Bulleye (january 2022 release, already in beta), Fedora have a RISC-V flavor already working on the BeagleV Starlight open-source board and its StarFive JH7100 processor, and there is a port of Yocto.

For reference, here is instructions about making the RISCV64 virtual machine on Debian Wiki, and a more general guide to make Linux run on Qemu, RISC-V.

You can find the Debian RISC-V system image on this page, just click on to download (direct link). This image is made with Debian Quick Image Baker (dqib)

And the Uboot for Qemu. I personally just extract and the directory that also contain, the « artifacts » Debian image.

By default image is in Qcow format, that is more compact for unused blocks, but also really slower.
You can convert it easily by:

Here is the boot.sh to launch it (you can replace image.raw by image.qcow2, if you have a verypowerfull system and only place count: I use 2 cores and 512M of RAM. For huge compilation I restart it with more mem (1536M is generally enough, but more means more cache and faster compilation).

you can connect by ssh:

and rsync files via:

There is also BareDOOM a port of DOOM that run on RISC-V emulated in TinyEmu (source code in the same page, there is also a fork with additional features on GitHub, a system emulator for the RISC-V and x86 architectures), JSLinux allow to run it in a browser (There is also a Quake port on RISC-V K210 microcontroller based Sipeed Maix Bit board). There is also a patched version of buildroot for K210 (no-mmu), for building Linux on this platform.

Update 2 July 2021: Another RISC-V (RV32 only) emulator is Nemu (github) it is a part of XiangShan (香山) RISC-V open processor from Chinese Academy of Sciences (OpenXiangShan (Gitee)) made by Chinese Academy of Sciences, the processors should have the performances of an ARM Cortex-A72/A73 in july 2021 with a 28nm process in first batch (Yanqi hu / Yanqi Lake / 雁栖湖), and performances of an Intel i9-10900K in second batch ( Nanhu / South Lake / 南湖) in fall 2021, with 14nm process, both manufactured by TSMC, and it already run GNU/Linux distribution Debian. See also(中文).

Another Virtual Machine emulator for RISC-V is JuiceVM supporting RV64IMASU. It is lightweight, support small UART serial I/O and MMU

Several developers have received a first beta version of BeagleV RISC-V board. Here are demos (on youtube sadly) of first tries of different devs at beginning of may "BeagleV RISC-V Computer (Beta)" (unboxing), "BeagleV from BeagleBoard.org Fedora image Live Booting - 1" (booting), now BeagleV give a prepared Fedora with XFCE working on HDMI. 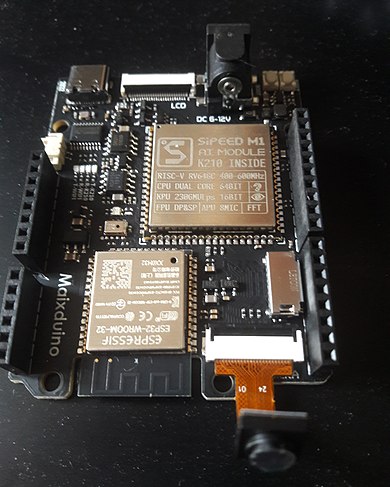 At the same time the port of true GNU/Linux on embedded devices like phones progress fast, on ARM architecture, with specialized distributions like PostMarket OS (and it's derivative Alpine Linux), or more general distributions, including Debian, Manjaro (ArchLinux derivative) etc. Port of KDE Plasma and GTK4/GNOME40 (especially GTK4.1+ with very efficient OpenGL acceleration, are of great help in this area. PinePhone from Pine64.org community is really an active and efficient hub for these ports. This phone (developer oriented in current state) is at the same time cheap (<200€) have hard switch for all network features, and every part can be easily changed. Those project are all ready to be ported on RISC-V versions of this kind of devices. Pine64 is already working on RISC-V opensource bl602 driver (see above) and a RISC-V (GD32VF103TB) running a smart/programmable iron solderer, and a future RISC-V based mother board to replace the current ARM one on the PinePhone could be totally realistic. See also LINux on MOBile for news on the port of Linux on Mobile devices.

An interesting post (and blog) about RISC-V assembly programming from Stephen Marz, another blog about RISC-V assembly from Daniel Mangun and one from ieee.org Build a RISC-V CPU From Scratch. A simple HelloWorld example, with deep explanations, including Linux RISC-V Application Binary Interface (ABI), to start with RISC-V assembly, based on GNU Assembler (support RV32 & RV64). There is also a Python made, limited, RISC-V assembler. A complete tutorial in French for starting with the Sipeed Longan Nano, (available for ~5 € with LCD screen).

HTML5 RISC-V Interpreter/simulator. There is also RARS a really slow/unusable Java RISC-V simulator (pacaur -S rars), jupiter (with link to other simulators) (pacaur -S jupiter) is another one, and spike (pacman -S spike) is a c made simulator. Ripes (pacaur -S ripes-git) is a very advanced one, with multiple level of pipe, data/instruction cache states, etc... Venus with online simulator in Kotlin language.