Work in progress: Following this tutorial there is still problem with automatic network dhcp and clock at boot time, until installing a full distro desktop. I still need to find the needed packages to resolve this without installing the full distro 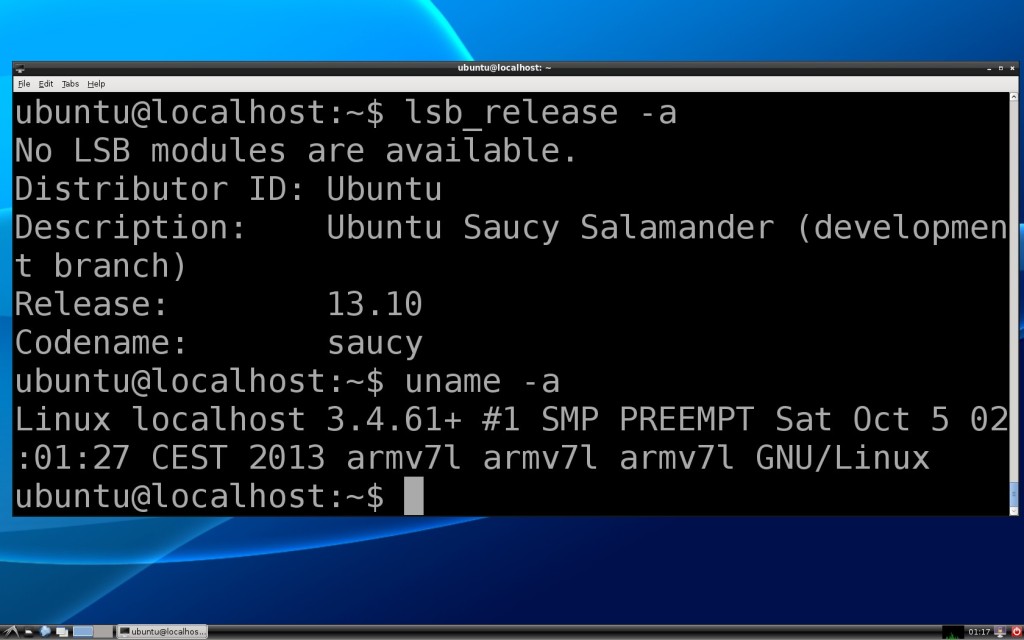 In my case, I start from a previously installed system with u-boot and kernel, this make things easier.

We take for our example:
* /arc as archive directory
* /mnt directory where the (futur) new system will be installed.

In a console, as root user, create a directory /arc, in which you will get ubuntu-core 13.10 beta2 tarball.

Creation of base system

We then unarchive this ubuntu core system base, and copy kernel modules, firmwares, loading modules file (for example for mali driver or if you didn’t hard linked network module(s) in the kernel). You also need to copy /etc/resolv.conf, to be able to get other packages after entering in chrooted environnement:

Depending if you use static network configuration or dynamic configuration, you need to copy your interface configuration in /etc/network/interface.d/ to obtain working network after reboot…

Chrooting (meaning changing root) is a method to change the root system into a subdirectory of current system. Here we move to the system basis we just installed.

Configure some base system details, as that’s asked in classic cd installation process:

Then install minimum required (at least for me) packages, that was not preinstalled:

Create a basic user, I choose ubuntu with ubuntu password for the example and reusable configuration, but you can choose your prefered nickname, and it is strongly advised to choose a minimal 12 characters password using a mix of alaphabetical characters, numbers and punctuation.

If you don’t use DHCP server for automatic configuration of this system, but instead static IP address, you should create now the network configuration file. It will been then easier to have a working system, get other packages and to connect to other system or from other system to your Cubie.

Network interfaces configuration are now in the following parsed directory, you can add a file by interface.

To have serial port consol you can add in /etc/init/, the ttyS0.conf containing the following lines:

If you have already rebooted, you can start it to immediatly (without re-reboot) with the following command:

At this time, to activate manually network, you need to do this manually after stat. I didn’t found the good solution, I will update this post when I found the best method.

The solution seems to be in

This file should contain something like the following, replace the MAC address by yours (can be see by ifconfig). This file should had been automagically created by the system. That wasn’t the case.

I installed xubuntu-desktop, that installed huge number of package at the same time, and after that it worked, the I have not 100% certitude that was not linked to a missing package

If this doesn’t work you still can do :

To mount the interface you then need to type the following line:

To activate the sound, add alsa-utils, it will install all needed package you will be able to use alsamxier:

A wrong time can cause lot of problems : Database inconsistencies, SSL certificate refused, etc… so…

Need of a graphic desktop environment ?

If you need a graphic desktop environment, you just have to install it using

Where DESKTOP is among the few available:

In this case synaptic have a usefull interface to manage Ubuntu debian based packages.

kpartx allow to loopback mount, not only a filesystem image, but a whole multipartition image, you can then accces each partition of the image as a classical partitionned disk. Very handy to partitioning update file systems on a whole µSD, NAND or harddrive image making lot of manipulation before copying it on the needed device.

Tutorial about kpartx with examples